East again to the dining room 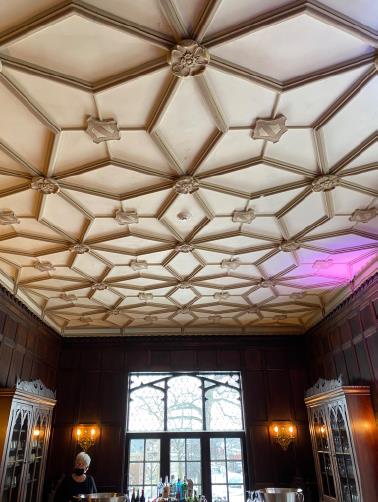 In 1902, Eliza Fowler passed away and the house was inherited by their grandson Cecil Fowler making him the second owner. In 1916-17, Cecil and his wife Louise completed major renovations and additions to the house including this formal English Tudor style dining room. Note the dark paneled walls, leaded glass windows and Tudor roses and shields in the decorative ceiling plaster work. The two antique Gothic style china cabinets and dining room table are original to the house and were acquired by Cecil and his wife during this period.

In 1916-17 the Fowlers moved out temporarily in order that major renovations and additions could be made to the house. It was at this time that the formal dining room and garden room was added as well as the Italian patio, fountains and gardens.

According to oral history the Fowler children were not allowed to dine in this room until they were around 10 years of age and could display proper table etiquette. Until then they were made to sit with the house staff in the room behind the kitchen.