Now to the Garden Room with the stone floor 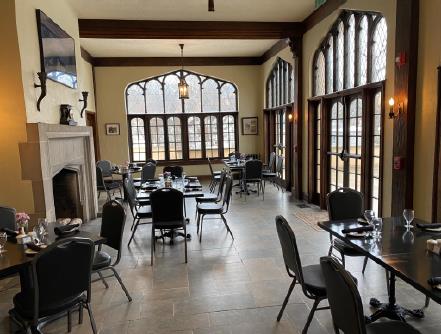 As mentioned this room was also added in the 1916-17 renovations. It is modeled after a castle great hall and served as the Fowlers living room. Note the stone floor, great fireplace, leaded glass windows, and the four carved medieval figures near the ceiling. This room served as the living room but was also used to host parties.

Cecil was a very successful business man in his own right. He partnered with Carl Fischer in the early 1920’s to build the Flamingo Hotel which was the first luxury hotel in Miami Beach and later was involved in the further development of that area. Among other things Carl Fischer is noted for having built the Indianapolis Motor Speedway. You will find some postcards of the Flamingo on the south wall.

It was during this time that the Fowler House saw another distinguished guest. Lord and Lady Cromwell became friends of the Fowlers during their time in Miami Beach and stayed here while visiting Lafayette. Lord Cromwell was a member of the English House of Lords and a very accomplished polo player. You’ll see his picture on the east wall.